Celebrating over 20 years of The Local Footy Show 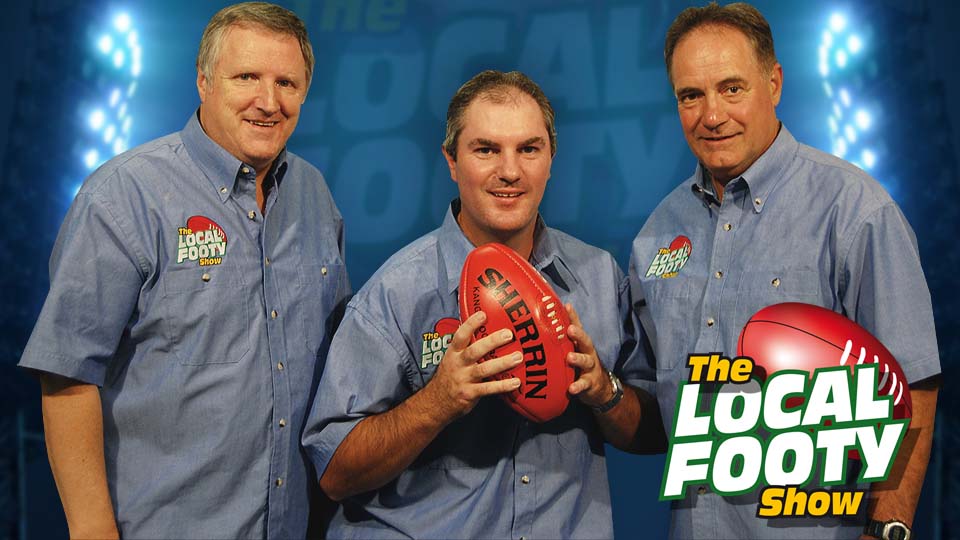 On your television set since 1997

With over 20 years of experience producing football content under their belt, Daryl Pitman alongside Kevin Murphy, Ian Bennett, Wayne Steele and Terry O'Callaghan are some of C31's most well-recognised figures and have been continuing to kick goals throughout the stations digital transition over the past six years.

Starting out as the Southern Footy Show, Daryl Pitman and his team of loyal football fanatics bridged the gap between the local football leagues (originally focusing on the Southern Football Netball League) and the wider Melbourne and Geelong region, bringing in new recruits and viewers invested in the state of grassroots football and media.

But the Southern Footy Show wasn't always a television program. Originally starting out on Southern FM, Daryl and the team were pioneers in technical ingenuity and problem solving, delivering a weekly news and commentary program on the SFNL, often working in less than ideal environments to put their show together.

In an interview with the SFNL, Daryl recalled bribing local homeowners with bottles of wine in exchange for access to their telephone line during the game, as not many football clubs had access to a telephone on the field.

He also recalls a time he and his team were perched in a box on top of a scaffold, with water up to their ankles and electrical cables running everywhere.

"We did it under some really testing and challenging conditions" notes Daryl.

This dedication to their craft continued into 1997, where Daryl and Southern Footy Show team transitioned their two-year strong radio show into a television program broadcast throughout the Melbourne and Geelong region on Channel 31.

Fast forward eleven years, and Daryl and the team expanded their horizons yet again towards the entire Victorian football scene, completing the process by rebranding their now ground-breaking program to The Local Footy Show.

Focused on shining a light on news and stories surrounding the game they love so much; The Local Footy Show team aims to share their passion for the game and highlight the value that it offers our local communities.

Daryl fondly remembers the groups trip to Woori Yallock to cover the Yarra Valley Mountain District Football League's grand final in 2009. In an interview with the North West Leader, he discusses the uncertainty around the participating teams due to the Black Saturday bushfires that had burnt through Kinglake and the surrounding areas only a few months prior.

"That was the year of the bushfires that wiped out Kinglake and they didn't know whether they were going to have a footy team."

Despite this tremendous setback, the Kinglake Football Club managed to pull together a full team to play in the grand final, coming away the runner up but attracting a notable crowd of dignitaries and A-listers dedicated to supporting the communities that had been hit hardest by the natural disaster.

In the background of all the fanfare? Kevin Murphy, Wayne Steele, Daryl Pitman, Ian Bennett and Terry O'Callaghan were producing coverage of the event, sharing the stories of the local final that may have never reached outside of the Yarra Valley area without their assistance.

Now in 2018, The Local Footy Show team continues to make their digital transition alongside Channel 31, building their digital presence and hosting regular livestreams, providing digital exclusive content to local football enthusiasts and offering a platform for viewers to ask questions about the game the team have been a part of for so long.

"The Local Footy Show team are a collection of dedicated individuals who will go to great lengths to highlight the importance of local communities, and as such perfectly aligns with the values that C31 Melbourne works to uphold every day" said Channel 31's Digital Manager, Mitchell Kalika.

"The Local Footy Show offers a much needed platform for Victoria's vibrant local sporting community, sharing the thousands of stories and events happening every day that are often drowned out in mainstream media.

Channel 31 looks forward to continuing our relationship with The Local Footy Show team for another 20 years to come, whether that be as a digital-only provider or on free-to-air television for the Melbourne and Geelong regions."

The Local Footy Show airs on Fridays at 7pm on Channel 31 (Digital 44).